Politics (from Greek: Πολιτικά, politiká, 'affairs of the cities') is the set of activities that are associated with making decisions in groups, or other forms of power relations between individuals, such as the distribution of resources or status. The branch of social science that studies politics and government is referred to as political science.

It may be used positively in the context of a "political solution" which is compromising and nonviolent, or descriptively as "the art or science of government", but also often carries a negative connotation. For example, abolitionist Wendell Phillips declared that "we do not play politics; anti-slavery is no half-jest with us." The concept has been defined in various ways, and different approaches have fundamentally differing views on whether it should be used extensively or limitedly, empirically or normatively, and on whether conflict or co-operation is more essential to it.

A variety of methods are deployed in politics, which include promoting one's own political views among people, negotiation with other political subjects, making laws, and exercising force, including warfare against adversaries. Politics is exercised on a wide range of social levels, from clans and tribes of traditional societies, through modern local governments, companies and institutions up to sovereign states, to the international level. In modern nation states, people often form political parties to represent their ideas. Members of a party often agree to take the same position on many issues and agree to support the same changes to law and the same leaders. An election is usually a competition between different parties.

A political system is a framework which defines acceptable political methods within a society. The history of political thought can be traced back to early antiquity, with seminal works such as Plato's Republic and Aristotle's Politics in the West, and Confucius's political manuscripts and Chanakya's Arthashastra and Chanakya Niti in the East. (Full article...)

Refresh with new selections below (purge) 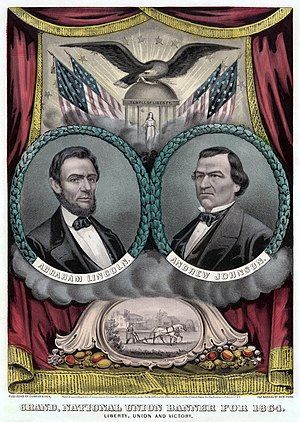 A campaign poster from the National Union Party during the US election of 1864, showing presidential candidate Abraham Lincoln (left) and his running-mate Andrew Johnson. The Republican Party changed its name and selected Johnson, a former Democrat, to draw support from War Democrats during the Civil War.

Wikinews on Politics and conflicts

Sir Winston Leonard Spencer-Churchill, (1874 – 1965) was a British politician and statesman known for his leadership of the United Kingdom during the Second World War. He is widely regarded as one of the great wartime leaders. He served as Prime Minister twice (1940–45 and 1951–55). A noted statesman and orator, Churchill was also an officer in the British Army, a historian, a writer, and an artist. During the 1930s, Churchill took the lead in warning about the danger from Hitler and in campaigning for rearmament. On the outbreak of World War II, he was again appointed First Lord of the Admiralty. Following the resignation of Neville Chamberlain on 10 May 1940, Churchill became Prime Minister. His steadfast refusal to consider defeat, surrender or a compromise peace helped inspire British resistance, especially during the difficult early days of the War when Britain stood alone in its active opposition to Hitler. Churchill was particularly noted for his speeches and radio broadcasts, which helped inspire the British people.

See the portal's Topics and categories page for a comprehensive overview.

The following are images from various politics-related articles on Wikipedia.