Golda Meir, Prime Minister of Israel from 1969 to 1974, once joked that "in Israel, there are 3 million prime ministers".[1] The particular version of proportional representation used, in which the whole country is a single constituency, encourages the formation of a large number of political parties, many with very specialized platforms, and often advocating the tenets of particular interest-groups.[citation needed] The prevalent balance[citation needed] between the largest parties means that the smaller parties can have strong influence disproportionate to their size. Due to their ability to act as tie breakers, they often use this status to block legislation or promote their own agenda, even contrary to the manifesto of the larger party in office.

From the founding of Israel in 1948 until the election of May 1977, Israel was ruled by successive coalition governments led by the Labor Alignment (or Mapai prior to 1967). From 1967 to 1970, a national unity government included all of Israel's parties except for the two factions of the Communist Party of Israel. After the 1977 election, the Revisionist Zionist Likud bloc (then composed of Herut, the Liberals, and the smaller La'am Party) came to power, forming a coalition with the National Religious Party, Agudat Israel, and with others. 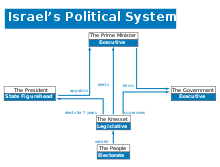 Israel political system with President of the State, Executive branch and Legislative branch

The 2013 Freedom in the World annual survey and report by U.S.-based Freedom House, which attempts to measure the degree of democracy and political freedom in every nation, ranked Israel as the Middle East and North Africa's only free country.[2] (However, the organization's 2015 and 2016 reports also listed Tunisia as free.[3]) The Economist Intelligence Unit rated Israel a "flawed democracy" in 2019.[4][needs update]

Prime Ministers and governments since 1996

In those elections – the first direct election of a prime minister in Israeli history – Likud leader Benjamin Netanyahu won by a narrow margin, having sharply criticized the government's peace policies for failing to protect Israeli security. Netanyahu subsequently formed a predominantly right-wing coalition government publicly committed to pursuing the Oslo Accords, but with an emphasis on security first and reciprocity. His coalition included the Likud party, allied with the Tzomet and Gesher parties in a single list; three religious parties (Shas, the National Religious Party, and the United Torah Judaism bloc); and two centrist parties, The Third Way and Yisrael BaAliyah. The latter was the first significant party formed expressly to represent the interests of Israel's new Russian immigrants. The Gesher party withdrew from the coalition in January 1998 upon the resignation of its leader, David Levy, from the position of Foreign Minister. 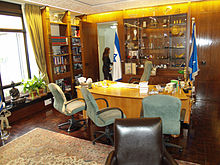 Office of the President of Israel in 2007.

On 27 May 1999, Ehud Barak from One Israel (an alliance of Labor, Meimad and Gesher) was elected Prime Minister, and formed a coalition with the Centre Party (a new party with centrist views, led by former generals Yitzhak Mordechai and Amnon Lipkin-Shahak), the left-wing Meretz, Yisrael BaAliyah, the religious Shas and the National Religious Party. The coalition was committed to continuing negotiations; however, during the two years of the government's existence, most parties left the coalition, leaving Barak with a minority government of the Labor and the center party alone. Barak was forced to call for early elections, the only prime ministerial elections not held alongside Knesset elections.

On 17 February 2001, elections resulted in a new "national unity" coalition government, led by Ariel Sharon of the Likud, and including the Labor Party. This government fell when Labor pulled out, and new elections were held 28 January 2003.

Based on the election results, Sharon was able to form a right-wing government consisting of the Likud, Shinui, the National Religious Party and the National Union. The coalition focused on improving Israeli security through fighting against terror, along with combating economic depression. However, when Sharon decided on his 2004 disengagement plan, which included evacuation of Israeli settlements in the Palestinian territories (particularly the Gaza Strip), the National Union and National Religious Party withdrew from the coalition. Sharon's attempt to add the Haredi United Torah Judaism to the coalition drove Shinui out, and forced Sharon to bring the Labor Party back into his coalition.

Since not all Likud Knesset members supported Sharon's disengagement plan, he still lacked a clear majority in the Knesset. Apparently calculating that his personal popularity was greater than that of the party, Sharon pulled out of the Likud on 21 November 2005 and formed his own new Kadima party. He was joined only days later by Shimon Peres, who pulled out of the Labor party to join Sharon in a bid for a new government. This represented a cataclysmic realignment in Israeli politics, with the former right and left joining in a new centrist party with strong support (unlike previous centrist parties in Israel, which lacked the popularity Kadima now seemed to enjoy).

On 4 January 2006 Prime Minister Sharon suffered a massive stroke and went into a coma, and subsequently died in 2014.[5] Designated Acting Prime Minister Ehud Olmert took power, becoming interim Prime Minister 100 days after Sharon's incapacitation. He did not become full Prime Minister due to elections being held in March and a new government being formed.

Following the March 2006 elections, which left Kadima as the largest party in the Knesset, Olmert became prime minister. He included Labour, Shas and Gil in a 67-seat coalition. In November 2006, Yisrael Beiteinu (11 seats) also joined the government, but departed from the coalition in January 2008. Faced with internal opposition due to mounting corruption charges, Olmert announced that he would not seek reelection in the next elections held in February 2009. Tzipi Livni won the September 2008 Kadima leadership elections, but failed to form a new coalition government.

On 19 March 2013 Netanyahu was designated Prime Minister again after Likud Yisrael Beiteinu won the most seats in the January elections. The new coalition included the Yesh Atid, the Jewish Home and Hatnuah parties, and excluded ultra-Orthodox parties.

Netanyahu achieved reelection to the national post on 18 March 2015, and subsequently formed a right-wing governing coalition with Likud at the forefront, which included the Jewish Home, Kulanu, Shas and United Torah Judaism.

An agreement was made by Naftali Bennett and Yair Lapid in early June 2021 to form a coalition government that would replace the long-lasting government led by Netanyahu. On 13 June 2021, Knesset voted and approved the appointment of the new catch-all coalition government, and on the same day Bennett was sworn-in as the new prime minister of Israel.

Compared to other countries, the number of parties contesting Knesset elections is relatively high considering the population size. This has resulted in a fragmented legislature where smaller parties have representation in the Knesset and no party has the 60+ seat majority needed to form a Government on its own.

This system also allows fringe parties which hold views outside of the mainstream political and public consensus to have representation in the Knesset. Examples of these are the Haredi religious parties, parties that represent the national religious or limited agenda parties such as Gil, which represented pensioners in the 2006 elections.

Israeli politics are subject to unique circumstances and often defy simple classification in terms of the political spectrum. Groups are sometimes associated with the political left or right, especially in international circles, according to their stance on issues important to the Arab–Israeli conflict.

On the political right: 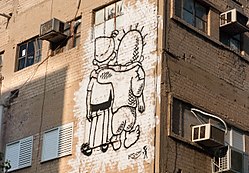 The Peace Kids, a mural affiliated with the Israeli left in Tel Aviv depicting Palestinian Handala and Israeli Srulik embracing one another.

On the political left:

Left-leaning politics are traditionally supported by Israel's academic, cultural, and business elites, as well as its security establishment.[6][7]

The political centre (represented in the Knesset by Yesh Atid and Kulanu, and in the past represented by Kadima and Gil)[8][9] combines the Israeli right's lack of confidence in the value of negotiations with the Palestinians and the Arab states with the assertion of the Israeli left that Israel should reduce the Israeli presence in the areas of the West Bank. As a result, the political centre supports unilateral actions such as the Israeli West Bank barrier and Israel's unilateral disengagement plan alongside the continuation of militaristic actions (such as the selective assassination policy) as a means of fighting against terrorism. Economically, the centre is liberal, supports economic liberalism, and has a capitalistic approach. Until recently, the political centre in the Knesset was relatively small—it never won more than 15 seats on average and centre parties tended to disintegrate within less than two terms (for example: Democratic Movement for Change, the Centre Party and Shinui). Other centre parties split up into factions which joined one or both of the two major parties, like Yachad (Ezer Weizman's party, which merged into the Alignment in 1987), Telem (Moshe Dayan's party, which eventually split up between the Alignment party and Likud), Independent Liberals (also merged into the Alignment) and the General Zionists (which together with Herut created Gahal, the forerunner of Likud).

Parties which do not identify themselves as political right or political left are also considered to be centre parties. For example: The Greens,[citation needed] which focuses on environmental subjects and so far has not been able to enter the Knesset.