In politics, a political scandal is an action or event regarded as morally or legally wrong and causing general public outrage. Politicians, government officials, party officials and lobbyists can be accused of various illegal, corrupt, unethical or sexual practices.[1] Scandalized politicians are more likely to retire or get lower vote shares.[2]

Scandal sells, and broadsides, pamphlets, newspapers, magazines and the electronic media have covered it in depth. The Muckraker movement in American journalism was a component of the Progressive Era in the U.S. in the early 20th century. Journalists have built their careers on exposure of corruption and political scandal, often acting on behalf of the opposition party.[3]

There are numerous contextual factors that make a scandal noteworthy, such as the importance of the people, the depth of conspiracy and the coverup strategies used.[4]

The political ideology of media owners plays a role—they prefer to target the opposition but will reluctantly cover their own side.[5][6] Journalists have to frame the story in terms of the audience's values and expectations to maximize the impact.[7] 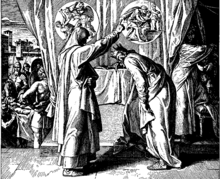 Nathan confronts David over his sex scandal with Bathsheba the wife of Uriah the Hittite, saying "by this deed you have given occasion to the enemies of the LORD to blaspheme" (2 Samuel 12:14) 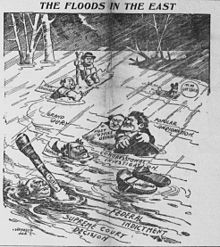 In the spring of 1904, many parts of the northeastern United States experienced severe flooding. Bob Satterfield portrayed politicians, bureaucrats, etc., trapped in the floods – which are not of water, but of scandal (April 9, 1904)