Political campaign strategy focusing on deficiencies of the opposition.

Negative campaigning is the process of deliberately spreading negative information about someone or something to worsen the public image of the described. A colloquial, and somewhat more derogatory, term for the practice is mudslinging.

Deliberate spreading of such information can be motivated either by honest desire of the campaigner to warn others against real dangers or deficiencies of the described, or by the campaigner's dishonest ideas on methods of winning in political, business or other spheres of competition against an honest rival. However, if the mudslinging statements can be proved to be correct, mudslinging takes the moral dimension of an opponent's duty serving the greater good by exposing the weakness of the other candidate.

The public image of an entity can be defined as reputation, esteem, respect, acceptance of the entity's appearance, values and behaviour by the general public of a given territory and/or a social group, possibly within time limits. As target groups of public and their values differ, so negativity or positivity of a public image is relative; thus, to be successful, negative campaigning has to take into account current values of the group it addresses. The degree of strictness in practicing the group's values as opposed to its tolerance for violating the norms has also to be taken into consideration. 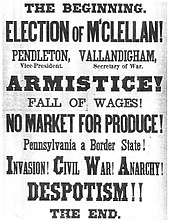 Poster attacking the Democratic Party ticket in the run-up to the 1864 United States presidential election.

Attack ads focus exclusively on the negative aspects of the opponent. There is no positive content in an attack ad, whether it is about the candidate or the opponent. Attack ads usually identify the risks associated with the opponent, often exploiting people's fears to manipulate. Because attack ads have no positive content, they have the potential to be more influential than contrast ads in shaping voters’ views of the sponsoring candidate's opponent.[1] One of the most famous attack ads was Daisy Girl by the campaign of Lyndon B. Johnson that successfully portrayed Republican Barry Goldwater as threatening nuclear war. Common attack ad themes include painting an opponent as soft on criminals, dishonest, corrupt, or a danger to the nation. Another relatively common theme is attacking the other side for running a negative campaign.

Push polls are attacks disguised as telephone polls. They might ask a question like "How would you react if Candidate A was revealed to beat his wife?", giving the impression that Candidate A might beat his wife. Members of the media and of the opposing party are deliberately not called making these tactics all but invisible and unprovable.

Dirty tricks are also common in negative political campaigns. These generally involve secretly leaking damaging information to the media. This isolates a candidate from backlash and also does not cost any money. The material must be substantive enough to attract media interest, however, and if the truth is discovered it could severely damage a campaign. Other dirty tricks include trying to feed an opponent's team false information hoping they will use it and embarrass themselves.

Often a campaign will use outside organizations, such as lobby groups, to launch attacks. These can be claimed to be coming from a neutral source and if the allegations turn out not to be true the attacking candidate will not be damaged if the links cannot be proven. Negative campaigning can be conducted by proxy. For instance, highly partisan ads were placed in the 2004 U.S. presidential election by allegedly independent bodies like MoveOn.org and Swift Boat Veterans for Truth.

Sponsors of overt negative campaigns often cite reasons to support mass communication of negative ideas. The Office of National Drug Control Policy uses negative campaigns to steer the public away from health risks. Similar negative campaigns have been used to rebut mass marketing by tobacco companies, or to discourage drunk driving. Those who conduct negative political campaigns sometimes say the public needs to know about the person he or she is voting for, even if it is bad. In other words, if a candidate's opponent is a crook or a bad person, then he or she should be able to tell the public about it.

Martin Wattenberg and Craig Brians, of the University of California, Irvine, considered in their study whether negative campaigning mobilizes or alienates voters. They concluded that data used by Stephen Ansolabehere in a 1994 American Political Science Review article to advance the hypothesis that negative campaigning demobilizes voters was flawed.

A subsequent study done by Ansolabehere and Shanto Iyengar in 1995[2] corrected some of the previous study's flaws. This study concluded that negative advertising suppressed voter turnout, particularly for Independent voters. They speculated that campaigns tend to go negative only if the Independent vote is leaning toward the opponent. In doing so, they insure that the swing voters stay home, leaving the election up to base voters. They also found that negative ads have a greater impact on Democrats than on Republicans. According to them, base Republicans will vote no matter what (and will vote only for a Republican), but Democrats can be influenced to either stay home and not vote at all or to switch sides and vote for a Republican. This, combined with the effect negativity has on Independents, led them to conclude that Republicans benefit more from going negative than Democrats.

Other researchers have found different, more positive outcomes from negative campaigns. Rick Farmer, PhD, an assistant professor of political science at the University of Akron found that negative ads are more memorable than positive ads when they reinforce a preexisting belief and are relevant to the central issues of a marketing campaign. Researchers at the University of Georgia found the impact of negative ads increases over time, while positive ads used to counteract negative ads lack the power of negative ads.[3] Research also suggests negative campaigning introduces controversy and raises public awareness through additional news coverage.[4]

Kyle Mattes and David P. Redlawsk in The Positive Case for Negative Campaigning show through surveys and experiments that negative campaigning may provide informational benefits for voters. Without negativity, voters would not have full information about all of their choices, since no candidate will say anything bad about herself. They argue that candidates have to point out the flaws in their opponents for voters to be fully informed.

Negative ads can produce a backlash. A disastrous ad was run by the Progressive Conservative Party of Canada in the 1993 Canadian federal election, apparently emphasizing Liberal Party of Canada leader Jean Chrétien's Bell's Palsy partial facial paralysis in a number of unflattering photos, with the subtext of criticizing his platforms. Chrétien took maximum advantage of the opportunity to gain the public's sympathy as a man who struggled with a physical disability and his party's subsequent overwhelming victory in the election helped reduce the governing Progressive Conservatives to two seats, and losing official party status.

A similar backlash happened to the Liberal Party in the 2006 federal election for running an attack ad that suggested that Conservative leader Stephen Harper would use Canadian soldiers to patrol Canadian cities, and impose some kind of martial law. The ad was only available from the Liberal Party's web site for a few hours prior to the release of the attack ads on television; nevertheless, it was picked up by the media and widely criticized for its absurdity, in particular the sentence "we're not making this up; we're not allowed to make this stuff up". Liberal MP Keith Martin expressed his disapproval of "whoever the idiot who approved that ad was," shortly before Liberal leader Paul Martin (no relation) stated that he had personally approved them. The effect of the ads was to diminish the credibility of the party's other attack ads. It offended many Canadians, particularly those in the military, some of whom were fighting in Afghanistan at the time. (See 2006 Canadian federal election)

More recently, in the 2008 US Senate race in North Carolina, Republican incumbent Elizabeth Dole attempted an attack ad on Democratic challenger Kay Hagan, who had taken a small lead in polls, by tying her to atheists. Dole's campaign released an ad questioning Hagan's religion and it included a voice saying "There is no God!" over a picture of Kay Hagan's face. The voice was not Hagan's but it is believed the ad implied that it was. Initially, it was thought the ad would work as religion has historically been a very important issue to voters in the American south, but the ad produced a backlash across the state and Hagan responded forcefully with an ad saying that she was a Sunday school teacher and was a religious person. Hagan also claimed Dole was trying to change the subject from the economy (the ad appeared around the same time as the 2008 financial crisis). Hagan's lead in polls doubled and she won the race by a nine-point margin.

While some research has found advantages and other has found disadvantages, some studies find no difference between negative and positive approaches .[8]

Research published in the Journal of Advertising found that negative political advertising makes the body want to turn away physically, but the mind remembers negative messages. The findings are based on research conducted by James Angelini, professor of communication at the University of Delaware, in collaboration with Samuel Bradley, assistant professor of advertising at Texas Tech University, and Sungkyoung Lee of Indiana University, which used ads that aired during the 2000 presidential election. During the study, the researchers placed electrodes under the eyes of willing participants and showed them a series of 30-second ads from both the George W. Bush and Al Gore campaigns. The electrodes picked up on the "startle response," the automatic eye movement typically seen in response to snakes, spiders and other threats. Compared to positive or neutral messages, negative advertising prompted greater reflex reactions and a desire to move away.[9]

In United States politics, negative campaigning has been called[who?] "as American as Mississippi mud" and "as American as apple pie".[10] Some research suggests negative campaigning is the norm in all political venues, mitigated only by the dynamics of a particular contest.[11] G. Gordon Liddy played a major role in developing these tactics during the Nixon campaign playing an important advisory of rules that led to the campaign of 1972.[citation needed] James Carville, campaign manager of Bill Clinton's 1992 election, is also a major proponent of negative tactics.[citation needed] Lee Atwater, best known for being an advisor to presidents Ronald Reagan and George H.W. Bush, also pioneered many negative campaign techniques seen in political campaigns today.[12] 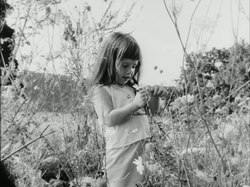