Deliberately fabricated falsehood made to masquerade as the truth
For other uses, see Hoax (disambiguation). 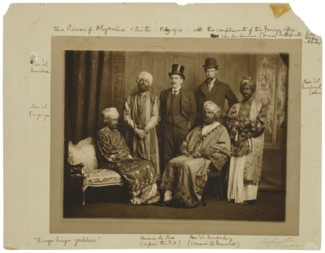 The Dreadnought hoaxers in Abyssinian regalia; the bearded figure on the far left is in fact the writer Virginia Woolf.

A hoax is a falsehood deliberately fabricated to masquerade as the truth. It is distinguishable from errors in observation or judgment,[1] rumors, urban legends, pseudosciences, and April Fools' Day events that are passed along in good faith by believers or as jokes.[2]

Zhang Yingyu's The Book of Swindles (c. 1617), published during the late Ming dynasty, is said to be China's first collection of stories about fraud, swindles, hoaxes, and other forms of deception.[3] Although practical jokes have likely existed for thousands of years, one of the earliest recorded hoaxes in Western history was the drummer of Tedworth in 1661.[4] The communication of hoaxes can be accomplished in almost any manner that a fictional story can be communicated: in person, via word of mouth, via words printed on paper, and so on. As communications technology has advanced, the speed at which hoaxes spread has also advanced: a rumor about a ghostly drummer, spread by word of mouth, will impact a relatively small area at first, then grow gradually. However, hoaxes could also be spread via chain letters, which became easier as the cost of mailing a letter dropped. The invention of the printing press in the 15th century brought down the cost of a mass-produced books and pamphlets, and the rotary printing press of the 19th century reduced the price even further (see yellow journalism). During the 20th century, the hoax found a mass market in the form of supermarket tabloids, and by the 21st century there were fake news websites which spread hoaxes via social networking websites (in addition to the use of email for a modern type of chain letter).

The English philologist Robert Nares (1753–1829) says that the word hoax was coined in the late 18th century as a contraction of the verb hocus, which means "to cheat," "to impose upon"[5] or (according to Merriam-Webster) "to befuddle often with drugged liquor."[6] Hocus is a shortening of the magic incantation hocus pocus,[6] whose origin is disputed.[7][better source needed]

Thomas Ady's A candle in the dark ... (1656) contains one of the earliest mentions of hocus pocus, the origin of the word hoax.[8]

Robert Nares defined the word hoax as meaning "to cheat," dating from Thomas Ady's 1656 book A candle in the dark, or a treatise on the nature of witches and witchcraft.[8]

The term hoax is occasionally used in reference to urban legends and rumors, but the folklorist Jan Harold Brunvand argues that most of them lack evidence of deliberate creations of falsehood and are passed along in good faith by believers or as jokes, so the term should be used for only those with a probable conscious attempt to deceive.[2] As for the closely related terms practical joke and prank, Brunvand states that although there are instances where they overlap, hoax tends to indicate "relatively complex and large-scale fabrications" and includes deceptions that go beyond the merely playful and "cause material loss or harm to the victim."[9]

According to Professor Lynda Walsh of the University of Nevada, Reno, some hoaxes—such as the Great Stock Exchange Fraud of 1814, labeled as a hoax by contemporary commentators—are financial in nature, and successful hoaxers—such as P. T. Barnum, whose Fiji mermaid contributed to his wealth—often acquire monetary gain or fame through their fabrications, so the distinction between hoax and fraud is not necessarily clear.[10] Alex Boese, the creator of the Museum of Hoaxes, states that the only distinction between them is the reaction of the public, because a fraud can be classified as a hoax when its method of acquiring financial gain creates a broad public impact or captures the imagination of the masses.[11]

One of the earliest recorded media hoaxes is a fake almanac published by Jonathan Swift under the pseudonym of Isaac Bickerstaff in 1708.[12] Swift predicted the death of John Partridge, one of the leading astrologers in England at that time, in the almanac and later issued an elegy on the day Partridge was supposed to have died. Partridge's reputation was damaged as a result and his astrological almanac was not published for the next six years.[12]

It is possible to perpetrate a hoax by making only true statements using unfamiliar wording or context, such as in the Dihydrogen monoxide hoax. Political hoaxes are sometimes motivated by the desire to ridicule or besmirch opposing politicians or political institutions, often before elections.

A hoax differs from a magic trick or from fiction (books, film, theatre, radio, television, etc.) in that the audience is unaware of being deceived, whereas in watching a magician perform an illusion the audience expects to be tricked.

A hoax is often intended as a practical joke or to cause embarrassment, or to provoke social or political change by raising people's awareness of something. It can also emerge from a marketing or advertising purpose. For example, to market a romantic comedy film, a director staged a phony "incident" during a supposed wedding, which showed a bride and preacher getting knocked into a pool by a clumsy fall from a best man.[13] A resulting video clip of Chloe and Keith's Wedding was uploaded to YouTube and was viewed by over 30 million people and the couple was interviewed by numerous talk shows.[13] Viewers were deluded into thinking that it was an authentic clip of a real accident at a real wedding; but a story in USA Today in 2009 revealed it was a hoax.[13] 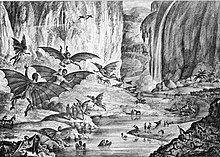 Governments sometimes spread false information to facilitate their objectives, such as going to war. These often come under the heading of black propaganda. There is often a mixture of outright hoax and suppression and management of information to give the desired impression. In wartime and times of international tension rumors abound, some of which may be deliberate hoaxes. 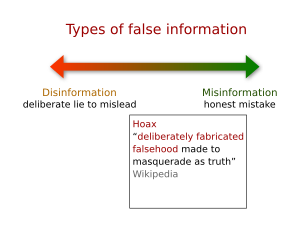 Hoaxes vary widely in their processes of creation, propagation, and entrenchment over time. Examples include:

Hoax news (also referred to as fake news[18][19]) is a news containing facts that are either inaccurate or false but which are presented as genuine.[20] A hoax news conveys a half-truth used deliberately to mislead the public.[21]

Hoax may serve the goal of propaganda or disinformation — using social media to drive web traffic and amplify their effect.[22][23][24] Unlike news satire, fake news websites seek to mislead, rather than entertain, readers for financial or political gain.[25][23]

Hoax news is usually released with the intention of misleading to injure an organization, individual, or person, and/or benefit financially or politically, sometimes utilizing sensationalist, deceptive, or simply invented headlines to maximize readership. Likewise, clickbait reports and articles from this operation gain advertisement revenue.