The act of making someone question their reality
For other uses, see Gaslight (disambiguation).

Gaslighting is a colloquialism that is loosely defined as making someone question their reality.[1][2]

The term is also used informally to describe someone (a "gaslighter") who persistently puts forth a false narrative which leads another person (or a group of people) to doubt their own perceptions to the extent that they become disoriented and distressed. This dynamic is generally only possible when the audience is vulnerable such as in unequal power relationships or when the audience is fearful of the losses associated with challenging the false narrative. Gaslighting is not necessarily malicious or intentional, although in some cases it is.[3] 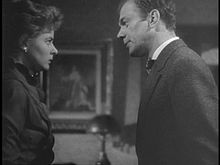 Ingrid Bergman and Joseph Cotten in the 1944 film Gaslight

The term is derived from the title of the play and films entitled Gas Light which are stories of a husband who uses trickery to convince his wife that she is insane in order to steal from her.[4][1]

Gaslight/gaslighting was largely an obscure or esoteric term until more recently when it broadly seeped into the American lexicon.

"Gaslighting" is occasionally used in clinical literature but is considered a colloquialism by the American Psychological Association.[1]

The article "Gaslighting: A Marital Syndrome" (1988) examines certain male behaviors during and after their extramarital affairs and the impact of those behaviors and associated attitudes on the men's spouses. They conclude that not only the husbands but also male therapists may contribute to the women's distress through mislabeling the women's reactions and through continuation of certain stereotypical attitudes that reflect negatively on the wife whose husband has had an affair.[8]

"Therapists may contribute to the victim's distress through mislabeling the [victim's] reactions. [...] The gaslighting behaviors of the spouse provide a recipe for the so-called 'nervous breakdown' for some [victims] [and] suicide in some of the worst situations."

Dorpat cautions clinicians about the unintentional abuse of patients when using interrogation and other methods of covert control in Psychotherapy and Analysis as these methods can subtly coerce patients rather than respect and genuinely help them.[9]: 31–46  He recommended more non-directive and egalitarian attitudes and methods on the part of clinicians,[9]: 225  "treating patients as active collaborators and equal partners".[9]: 246

In a 1997 case study, Lund and Gardiner reviewed a case of paranoid psychosis in an elderly female is reported in which recurrent episodes were apparently induced by the staff of the institution where the patient was a resident.[10]

Gaslighting may occur in parent–child relationships, with either parent, child, or both lying to the other and attempting to undermine perceptions.[11]

Oxford University Press warns that some psychologists are not encouraged by this increased international awareness of the dangers of gaslighting, warning that overuse of the term could dilute its potency and downplay the serious health consequences of such abuse.[7]

Philosophy scholar Kate Abramson suggests that there are individuals who cannot tolerate disagreement with or criticism of their view of things from certain individuals in their life (friends, loved ones, romantic partners) and an effective way to neutralize the possibility of criticism is to undermine others' conception of themselves as an autonomous locus of thought, judgement, and action. This effectively reduces the target's capacity to criticize or respond independently.[12]

In self-help and amateur psychology[edit]

Some physically abusive spouses may gaslight their partners by flatly denying that they have been violent.[14]

Sociopaths and narcissists consistently transgress social mores, break laws and exploit others, but typically also are convincing liars, sometimes charming ones, who consistently deny wrongdoing. Thus, some who have been victimized by sociopaths may doubt their own perceptions.[15]

Gaslighting in the workplace is when people do things that cause colleagues to question themselves and their actions in a way that is detrimental to their careers.[16] The victim may be excluded, made the subject of gossip, persistently discredited or questioned to destroy their confidence. The perpetrator may divert conversations to perceived faults or wrongs.[17] Gaslighting can be committed by anyone and can be especially detrimental when the perpetrator has a position of power.[18]

In the 2008 book State of Confusion: Political Manipulation and the Assault on the American Mind, the authors contend that the prevalence of the gaslighting in American politics began with the age of modern communications:

To say gaslighting was started by... any extant group is not simply wrong, it also misses an important point. Gaslighting comes directly from blending modern communications, marketing, and advertising techniques with long-standing methods of propaganda. They were simply waiting to be discovered by those with sufficient ambition and psychological makeup to use them.[19]

The term has been used to describe the behavior of politicians and media personalities on both the left and the right sides of the political spectrum.[19]

"Gaslighting" has been used to describe Russia's global relations. While Russian operatives were active in Crimea, Russian officials continually denied their presence and manipulated the distrust of political groups in their favor.[20]

"Gaslighting" has been as used to describe how leaders and followers of sectarian groups to ensure conformity of any potentially deviating members.[21][clarification needed]

Columnist Maureen Dowd described the Bill Clinton administration's use of the technique in subjecting Newt Gingrich to small indignities intended to provoke him to make public complaints that "came across as hysterical".[citation needed]

American journalists widely used the word "gaslighting" to describe the actions of Donald Trump during the 2016 US presidential election and his term as president.[22][23][24][25][26]

In March 2020, The Chicks released a song titled "Gaslighter", the title track from their album of the same name. The song references this form of manipulation,[27] and was inspired by lead singer Natalie Maines' divorce from actor Adrian Pasdar.[28]

In 2019, Anderson Cooper’s nightly news roundup, Anderson Cooper 360, has a special series called “We’ll Leave the Gaslight On,” dedicated to the lies of politicians.[citation needed]

For several months during 2018, gaslighting was a main plotline in NBC's soap opera Days of Our Lives, as character Gabi Hernandez was caught gaslighting her best friend Abigail Deveroux after Gabi was framed for a murder Abigail had committed in the series.[29]

The 2016 mystery and psychological thriller film The Girl on the Train explored the direct effects gaslighting had on the protagonist (Rachel).[22][30] During her marriage, Rachel's ex-husband Tom was a violent abuser and victimizer. Rachel suffered from severe depression and alcoholism. When Rachel would black out drunk, he consistently told her that she had done terrible things that she was incapable of remembering.[31]

Gaslighting was the main theme of a 2016 plotline in BBC's radio soap opera, The Archers. The story concerned the emotional abuse of Helen Archer by her partner and later husband, Rob Titchener, over the course of two years, and caused much public discussion about the phenomenon.[32]

In Wes Anderson's 2007 movie The Darjeeling Limited, character Peter Whitman asks his brother Jack about the actions of his stalking and controlling girlfriend, saying "Could she be gaslighting you?", after she sneaks a vial of her perfume into his luggage without his knowledge.[33][non-primary source needed]

The February 2000 Steely Dan album Two Against Nature contains the song "Gaslighting Abbie", telling the story of a man gaslighting his wife in order to be with his lover.[34]