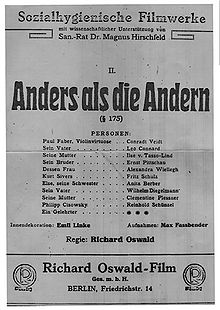 Anders als die Andern, one of the most notable banned movies in Germany due to homosexual themes.

Film censorship is carried out by various countries to differing degrees, sometimes as a result of powerful or relentless lobbying by organizations or individuals. Films that are banned in a particular country change over time.

A motion picture rating system is designated to classify films with regard to suitability for audiences in terms of issues such as sex, violence, substance abuse, profanity, impudence or other types of obscene content. A particular issued rating can be called a certification, classification, certificate.

Australia's Australian Classification Board (ACB), formerly known as the Office of Film and Literature Classification (OFLC), uses the Commonwealth Classification Act 1995 as a guide for the majority of the censorship within the country; however, each state and territory is free to make additional legislation (see Censorship in Australia). Australia is regarded by many to be the most restrictive on film ratings of all Western democratic countries, considering its history and prolific "refusal of classification" (tantamount to banning in other countries) to certain films, although restrictions have eased over the years.

In practice, films still get a short cinematic run before they are reviewed and prevented from being shown at cinemas or released on DVD. This is not a comprehensive list; many films that have been previously banned are not mentioned here (however, some have since been released uncut on DVD). Also not included are the numerous pornographic films deemed too excessive to release under an X18+ category, which are refused classification by the ACB.

"On February 14, 2011, the newspaper Jornal do Brasil (quoting the network's spokesperson) reported that Rede Record would be broadcasting the documentary in 2011, on a date yet to be specified."[5][6]

This film (short) about Di Cavalcanti was banned due a lawsuit open by Di Cavalcanti daughter, Elizabeth, in 1979. The film documented the wake and funeral of the Brazilian painter Di Cavalcanti. Since 1979 it can not be shown, at the request of his daughter Elizabeth through preliminary injunction granted by Justice, confirmed in 1983, for sentimental reasons tied with religious ideas. In 1985, the lawyer Felipe Falcon moved an action to reform the judgment, by proposing the dispossession of the film by the state on cultural grounds, to the detriment of the heirs of Di and Glauber. Yet with no solution in sight, Di Glauber must stay contained in a sealed box. 2004: In spite of everything, João Rocha ( director of Thuth Profane), nephew of the Glauber Rocha, has placed a copy on video on providers outside of Brazil: the internet users can make free downloads of the movie, proving that censor the cinema in digital age is useless.[7][8][9]

A Serbian Film had its release in Brazil liberated on August 5, 2011. The exception is Rio de Janeiro estate, where the film was forbidden due a lawsuit filed by the Democrats political party, who claim that the pedophilia scenes infringe the part of the Brazilian Constitution that protects children (Estatuto da Criança e do Adolescente). The case was overturned in 2012.[10][11]

At present, only films containing prohibited material (such as child pornography) or under court order (such as libel or copyright infringement) are banned in Canadian provinces.[citation needed]

In Mainland China, film censorship, often on political grounds, is rampant[citation needed]. Films in Mainland China are used to be reviewed by the State Administration of Press, Publication, Radio, Film and Television (SAPPRFT) (Chinese: 国家新闻出版广电总局) which dictated whether, when, and how a movie gets released. In 2018, the SAPPRFT was replaced by the National Film Administration (NFA) under the Publicity Department (Chinese: 国家电影局).[12] The NFA is separate from the NRTA under the State Council (Chinese: 广电总局).

Main article: Censorship in the Federal Republic of Germany

Pre war and during the First World War[edit]

In 1906, the first legislation arose discussing the censorship of film and media.[13] This was met with pushback, due to preexisting legislation regarding censorship of the media. The higher courts deemed the film censorship was indeed legal, however provided no guidance towards individual parts of Germany, creating discrepancies province to province.[13]

In Germany, film censorship was abolished in 1918,[14] however the Motion Picture Law (Lichtspielgesetz) in 1920 created film review boards which were used to screen films that may perpetrate a negative image of Germany to the rest of the world.[14]

In India, films are censored by the Central Board of Film Certification (CBFC), a statutory censorship and classification body under the Ministry of Information and Broadcasting, Government of India. Films should be certified by the board to publicly exhibit it in India, including films shown in television. CBFC is considered to be one of the most powerful censor boards in the world due to its strict ways of functioning.

All films depicting anything deemed contrary to Islamic morals are banned outright in Iran.

Main article: Film censorship in the Republic of Ireland

Due to the small size of Ireland, films banned by the British Board of Film Classification (BBFC) were rarely even submitted for release in Ireland, due to the high costs of promotion and distribution for such a small audience. Similarly, BBFC cuts are often left in DVD releases, due to the difficulties in separating the two film supplies.

This changed in 2000; many of these films have since been unbanned and rated anywhere from PG to 18. During the review process it was decided that no more films would be banned for either theatre or video release, but some bans are still in place. Banned films can still be viewed at private members' clubs with 18+ age limits.

After the promulgation of 18th Constitutional amendment by the constituent Assembly of Pakistan, Sindh and Punjab Province has established their own film censor boards nameli Punjab Board of Film Censors and Sindh Board of Film Censors, Mr khalid bin Shaheen is the current Chairman SBFC and Mr. Adil Ahmed is the Secretary Sindh board of film censors.

During the Apartheid regime, films depicting interracial couples were banned and/or censored for content - the James Bond films Live and Let Die and A View To A Kill had love scenes which were censored by the South African government.[citation needed]

In 1996 The Film and Publication Board, or FPB, was established under the Film and Publications Act. This board was created as a content-classification and regulation authority, operating under the Minister of Communications. The FPB's purpose was ostensibly to tackle issues of child pornography and child abuse, as well as to provide ratings to publicly consumed media such as movies, music and television programs. Under these directives, its mandate could be considered one of state censorship. [16]

According to the Internet Movie Database, there are no currently-banned films in South Korea.[17]

In recent years, sexual scenes have been a major issue that pits filmmakers against the Media Rating Board. Pubic hair and male or female genitalia are disallowed on the screen, unless they are digitally blurred. In rare cases extreme violence, obscene language, or certain portrayals of drug use may also be an issue. Korea has a five level rating systems; G, PG-12, PG-15, PG-18 and Restricted.[citation needed]

The infamous video nasty list was created in 1982 to protect against obscenity. Films on this list were banned and distributors of said films were liable to be prosecuted (some of the films were banned before the list was made). This list banned 74 films at one point in the mid-1980s; the list was eventually trimmed down, and only 39 films were successfully prosecuted. Most of the films (even of the 39 successfully prosecuted) have now been approved by the BBFC, cut or uncut (see Video Recordings Act 1984).

The United States has no federal agency charged with either permitting or restricting the exhibition of motion pictures. Most instances of films being banned are via ordinances or proclamations by city or state governments.[18] Some are instances of films being judicially found to be of an obscene nature and subject to specific laws against such material (i.e., child pornography). Such findings are usually only legally binding in the jurisdiction of the court making such a ruling.

Logo for the Motion Picture Association.

The established film industry in the United States began a form of self-censorship in the late 1920s called the Motion Picture Production Code to forestall any possible formation of a federal censoring agency. In 1968, the Production Code[19] was superseded by the MPAA film rating system. The rating system is broken down into five categories and each have a respective definition. They are G (General Audiences; All ages admitted), PG (Parental Guidance Suggested; Some material may not be suitable for children), PG-13 (Parents Strongly Cautioned; Some material may be inappropriate for children under 13), R (Restricted; Under 17 requires accompanying parent or adult guardian), and NC-17 (No one under 17 admitted).[20] It was created by Jack Valenti in 1968. In addition to providing film ratings, the MPAA also lobbies Congress, helps in international promotion of the U.S. film industry, and piracy protection.[21] 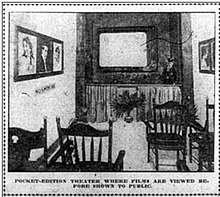