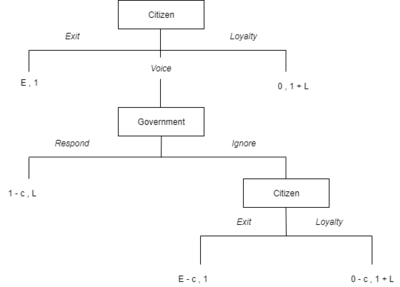 The Exit, Voice, Loyalty (EVL) model[1] or Exit, Voice, Loyalty, Neglect (EVLN) is used in the fields of comparative politics and organizational behavior. It is an extensive form game used to model interactions typically involving negative changes to one player's environment by another player.[1] These concepts first appeared in Albert Hirschman's more broadly focused 1970 book, Exit, Voice, and Loyalty: Responses to Decline in Firms, Organizations, and States.[2] A common use in political science is between citizens and their government. Usually in this use the Citizen player is any group within a society ranging from a single individual to the citizenry as a whole.[3]

The EVL Model involves two agents and their responses to a change initiated before the game began. The first agent is commonly referred to as the Citizen and the second is commonly referred to as the Government. EVL assumes that the change implemented before the game began was performed by the Government and negatively harms the Citizen.

The formal definition of EVL is the following:[3]

There are two players:

. Subsequent to this (and any other action choices), the game terminates.

Formally, this is represented by the set of histories

The terminal histories, upon reaching which the game terminates, is given by

For all other histories, one of the two players makes a move, and this is given by the player function

The utility function of the

incurs a cost of

whenever they choose to raise their

, they get a payoff of

. Irrespective of this choice, they can choose to

for a payoff of

for payoff of zero.

Similarly, the payoff function of the

incurs a cost of one for

concerns, and gains a payoff of

The precursory policy that the Government has implemented has the effect of removing a benefit with the value of 1 from the Citizen and giving it to the Government. The value was chosen to be 1 so that all comparisons within the game can easily be converted to ratios and then adapted to other situations where the true value of the benefit is known.

In EVL, all possible actions that can be taken by the Citizen are grouped into one of three options. Exit options are those in which the Citizen accepts the loss of the benefit and instead alters their behavior to get the best possible alternative. Examples could include relocating assets to avoid a new tax, reincorporating a business to avoid new regulations, buying goods from a different store when the quality of the original diminishes, voting out the incumbent, etc.[1] The payoff of an Exit option for the Citizen is the variable E and the Government gets to keep the 1 it took initially.[1][3] 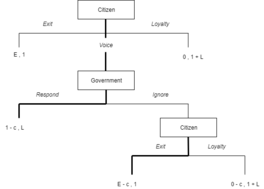 Nash Equilibria for a Dependent Government (L > 1) and a Citizen with a Credible Exit Threat ( 0 < E < 1-c). This is the only case where the Government chooses to Respond. 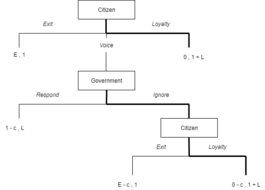 Nash Equilibria for when the Citizen has no Credible Exit Threat (E < 0). Notice that it does not matter whether the Government is Dependent or Autonomous (L can take any value).

The EVL game is solved differently whether the Government is dependent or autonomous from the Citizen, whether the Citizen has or does not have a credible Exit option, and the cost of using Voice.[3][1] 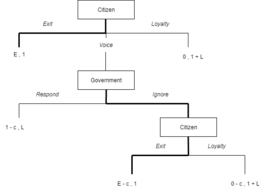 Depending on the values of E, L, and c for different Government and Citizen players, the Government will either enact or not enact the instigating policy. The EVL game is largely never played out in reality but is used to model why institutions and individuals with relationships like those in EVL behave the way they do. In reality the players typically do not have complete information. Typically, the game can be assumed as having a precursory step in which the Government decides whether or not to implement the policy.[1]

Many of the applications of this theory involve the different ways in which the extensive form game resolves when the values of E, L, and c are adjusted.

When the Citizen has a viable Exit option and the Government is dependent on the Loyalty of the Citizen (i.e. E > 0, L > 1) the Government would not try to take away the benefit to begin with as the game would end with as it knew it would have to Respond. A parallel can be drawn to the structural dependence of the state on capital within Structural Marxism where the state is seen as being dependent on capital for its existence and the capitalists have viable Exit options through their easily mobile assets while labor does not.[1]

In cases where the Citizen has no viable Exit option and the Government is dependent on the Loyalty of the Citizen (i.e. E < 0, L > 1) the Citizen exercises Loyalty in the face of the environmental change. Real world examples can be drawn to the Financial crisis of 2007–2008 in the United States regarding the financial bailout of the financial and automobile sectors. Within a week of Lehman Brothers declaring bankruptcy the United States Treasury drafted the Troubled Asset Relief Program which planned to spend $700 billion to buy assets from struggling banks and was passed two weeks later.[1] The then Treasury Secretary Paulson said "you won't leave this room until you agree to take this money" to the heads of the largest banks during a meeting in Washington D.C.[1] Ford, General Motors, and Chrysler sent their chief executives to Congress to ask for a bailout of $25 billion from the Troubled Asset Relief Program. Members of Congress initially refused the bailout and mocked the executives having flown private jets to the meeting. They later returned having carpooled and were granted $13.4 billion.[3] The automotive industry had to go through many more hurdles to receive any funds than members of the financial sector.[4] The government and economy were dependent on the survival of both sectors but the difference in response to each facing financial trouble can be interpreted as a difference in Exit option between the two. The automotive sector has much less mobile assets as factories take much longer to move outside the country compared to financial institutions and so can be thought of as having a much weaker Exit option.[1]

Other examples include political parties who require the support of certain groups to get elected but those groups have no viable alternative for whom to vote for.[1] In this scenario the political party assumes the role of the Government and the group is the Citizen. The Government is dependent on the Citizen but the Citizen is without a viable Exit option (i.e. L > 1, E < 0).

This includes leaving the organization, transferring to another work unit, or at least trying to get away from the unsatisfactory situation. The general theory is that job dissatisfaction builds over time and is eventually strong enough to motivate employees to search for better work opportunities elsewhere. This is likely true to some extent, but the most recent opinion is that specific 'shock events' quickly energize employees to think about and engage in exit behavior. For example, the emotion reaction you experience to an unfair management decision or a conflict episode with a co-worker motivates you to look at job ads and speak to friends about job opportunities where they work. This begins the process of realigning your self-concept more with another company than with your current employer. [5]

Voice refers to any attempt to change, rather than escape from, the dissatisfying situation. Voice can be constructive response, such as recommending ways for management to improve the situation, or it can be more confrontational, such as by filing formal grievances. In the extreme, some employees might engage in counterproductive behaviors to get attention and force changes in the organization.

According to A. O. Hirschman, the author of Exit, Voice, and Loyalty, the loyalty of a member to the organization he belongs to is higher when the entrance costs (physical, moral, material, or cognitive) are higher. Loyalty would be characterized as passively waiting for conditions to improve.

Neglect includes reducing work efforts, paying less attention to quality, and increasing absenteeism and lateness. It is generally considered a passive activity that has negative consequences for the organization. The Neglect response is passively allowing for conditions to worsen.