The Thornton School is noted for blending the rigors of a traditional conservatory-style education with a forward-looking approach to training the next generation of musicians. Highly regarded internationally, the school is widely ranked as one of the top 10 schools of music in the United States.[3]

The USC Thornton School of Music was founded in 1884 and dedicated in 1999. It was named in honor of philanthropist Flora L. Thornton following a $25 million gift from her foundation.[4] At the time, this was the largest donation to a school of music in the United States. In 2006, she donated an additional $5 million to support the facility needs of the school.[5]

Thornton is one of the few highly-regarded music schools in the United States to offer a degree program in early music. Students of baroque, renaissance and medieval music (vocal or instrumental) may enroll in a specialized degree program.

Thornton was one of the first schools of music to offer an undergraduate program in music industry,[8] a program still regarded as among the best in the country, and currently offers both a Bachelor of Science and a Master of Science in Music Industry.[9] Thornton offers the only comprehensive program in Scoring for Television and Film.[10] It also has a program in studio guitar performance.[11]

In 2018, USC Thornton announced a new model of classical music education[15] for undergraduate Classical Performance and Composition students.[16] Hallmarks of USC Thornton's redesigned curriculum include restructured lessons, rehearsals, and classes to prepare students for a vibrant career in music.[17][18] 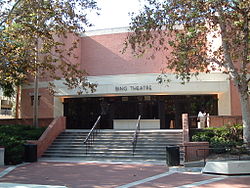 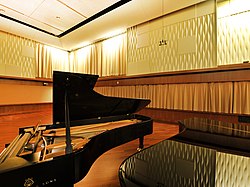 The following list is limited to individuals who have articles in Wikipedia.