Somalia is a federal republic consisting of six federal states, including Somaliland, as well as the Banadir Regional Administration. Somalia is further subdivided into Eighteen administrative regions (gobollada, singular gobol),[1] which are in turn subdivided into districts.

The Federal Parliament is tasked with selecting the ultimate number and boundaries of the autonomous regional states (officially, Federal Member States) within the Federal Republic of Somalia.[4][5] To this end, the legislature in December 2014 passed a law establishing the Boundary and Federalization Commission.[6] The body is mandated with determining the boundaries of the country's constituent Federal Member States, as well as arbitrating between these regional states on their respective jurisdiction.[7] 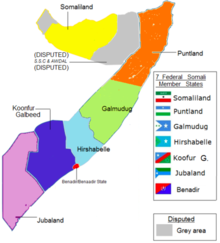 As of 2016, Somalia is officially divided into 6 federal member states, including the claimed but uncontrolled Somaliland:[8][3]

President of Somalia Mohamed Siad Barre established five of these regions in 1974–75 for political reasons: Middle Juba, Lower Juba, Gedo, Bay, and Bakool;[9] Banaadir shrank to Mogadishu city only at the same time.[10]

Below are the regions of Somalia, along with their capitals shown in parentheses:

Map of the Republic of Somaliland

Somaliland functions as a de facto state that is located in the north of Somalia, adjacent to the Federal Republic of Somalia, which claims Somaliland as Federal Government of Somalia. Somaliland does not have full diplomatic relations with any other country. According to Somalia, Somaliland comprises the northwestern portion of its territory and around 13.6% of its total claimed territory. Most countries worldwide recognize Somaliland as a breakaway or autonomous region of Somalia. In reality, Somalia has no effective control over Somaliland.[11][12]