Squire Patton Boggs is an international law firm with 42 offices in 20 countries. It was formed in 2014 by the merger of multinational law firm Squire Sanders with Washington, D.C. based Patton Boggs. It is one of the 30 largest law firms in the world by total headcount and gross revenue, twelfth largest firm in the UK by revenue, and one of the top 15 by number of countries occupied.[3]

Its largest offices are in Washington, London and Cleveland, each having more than 100 lawyers.[4] The firm serves a diverse base of legal clients ranging from Fortune 100 and FTSE Index 100 corporations to newly emerging companies, private clients and local and national governmental entities.[5] The company lobbies on behalf of the entity of the Saudi government that was directly responsible for the murder of journalist Jamal Khashoggi; after the murder, the company continued to represent the entity for years until a pressure campaign led the company to drop the client.[6][7] Due to its lobbying role for Saudi Arabia, multiple members of Congress refused to interact with representatives of the firm.[7]

The firm was founded in Cleveland, Ohio, in 1890 as Squire, Sanders & Dempsey by Cleveland attorneys Andrew Squire and James H. Dempsey, and Judge William B. Sanders. [9][10]

Until the 1990s, it was primarily an Ohio law firm, with the exception of Washington, DC and offices in several other US cities and Brussels It was one of the first US law firms to expand into Eastern Europe in the wake of the Cold War, under the leadership of firm chairman Thomas J. Quigley. It opened several offices in the former Soviet bloc region during the 1990s, taking on a key role in the privatization of state enterprises in the Czech Republic, Slovakia, Hungary, Ukraine and Poland.[11][12] It subsequently absorbed a number of other legal practices including several Pacific Rim offices of Graham & James and the Florida-based law firm of Steel Hector & Davis.[13] The firm also made overtures toward mergers with Denton Wilde Sapte, Seyfarth Shaw and Bryan Cave under Stanton's leadership.[11]

Hammonds was an international law firm headquartered in Leeds, United Kingdom, with offices in Beijing, Berlin, Birmingham, Bradford, Brussels, Hong Kong, Leeds, Madrid, Manchester, Munich and Paris. Hammonds' origins dated back to the founding of a legal practice in Yorkshire in 1887. Although it was a major firm in Yorkshire and the West Midlands region, it did not open a London office until 1991.[11]

In 2000, Hammond Suddards and Birmingham-based Edge Ellison (previously led by Digby Jones, Baron Jones of Birmingham) merged, forming Hammond Suddards Edge, at that time the 11th-largest law firm in the UK.[14] The firm's rapid expansion left it £30 million in debt in the early 2000s and led to a downsizing through 2005.[12] The firm was ranked 20th in the UK by turnover in The Lawyer UK 100 2006, with a turnover of £132 million. Throughout 2005-2009, the firm underwent significant restructuring under the stewardship of Managing Partner Peter Crossley. As of 2009, the partnership consisted of approximately 180 partners and more than 1,000 employees. Hammonds converted to a Limited Liability Partnership in May 2008.[15]

Hammonds and Squire, Sanders & Dempsey announced that they were in merger talks in August 2010.[16] The partnerships of both firms voted in favor of a merger in November 2010, and it was completed on January 1, 2011, forming the Squire Sanders Swiss association.[17] The merger with Hammonds added offices in Madrid, Berlin, Paris and Munich to the Squire Sanders network, in addition to significantly boosting its presence in the UK where it previously had only 30 lawyers.[12] London overtook Cleveland as the largest office of the combined firm.[11]

The American Lawyer estimated Squire Sanders to be the 24th largest law firm in the world by number of lawyers[18] and 41st by annual revenue[19] as of 2012.

The firm of Patton Boggs was founded in 1962 by James R. Patton, Jr. and joined soon after by George Blow and Thomas Hale Boggs, Jr. It has "participated in the formation of every major multilateral trade agreement considered by Congress."[20] Boggs joined the firm in 1966 after serving as an economist for the Joint Economic Committee and in the executive office of President Lyndon B. Johnson.[citation needed]

According to OpenSecrets, Patton Boggs was one of the top law firms contributing to federal candidates during the 2012 election cycle, donating US$1.7 million, 67% to Democrats.[21] By comparison, during that same period Akin Gump Strauss Hauer & Feld donated US$2.56, 66% to Democrats,[21] while oil conglomerate ExxonMobil donated US$2.66 million, 88% to Republicans.[22] Since 1990, Squire Patton Boggs contributed US$14.12 million to federal campaigns, and since 1998 spent US$2.72 million on lobbying.[23]

The 2014 Vault.com survey of more than 18,800 associates ranked Patton Boggs as having the best record for pro bono work in the country,[24] and the firm was among the prestigious white-shoe law firms.[25][26][27]

Following its involvement in a lawsuit with Chevron in Ecuador,[28] Patton Boggs underwent layoffs and partner exits in 2013 amid a 12% drop in revenue, and entered merger talks with Squire Sanders in 2014.[29] The firms announced that they would merge on June 1, 2014 under the name Squire Patton Boggs, adding 330 lawyers to the firm's existing headcount.[30]

Squire Patton Boggs now maintains one of the largest lobbying practices in Washington, D.C., gaining extensively from the merger with Patton Boggs, which was the largest US lobbying firm by revenue between 2003 and 2013.[31][32] 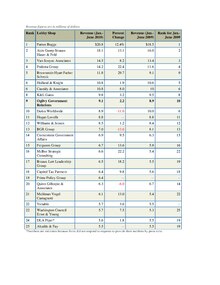 The combined firm adopted Squire Sanders' existing merit pay system for partners over Patton Boggs' more traditional "eat what you kill" system.[34] Partner compensation under the merit system ranges from US$300,000 for some non-equity partners to US$3 million for the three most highly compensated partners.[11]

The firm currently posts an abnormally high leverage ratio, with almost eight lawyers to every partner, according to its 2014-end-of-the-year numbers for full-time lawyers. The D.C. offices of Squire Sanders and Patton Boggs recently moved into the same building, previously the long-standing home of legacy Patton Boggs. The combined firm kept separate revenue pools for its two legacy partnerships from the June merger until the end of 2014, but these are now unified.[35]

In 2016, the firm announced a merger with San Francisco-based disputes and compliance boutique Carroll, Burdick & McDonough, adding 50 lawyers in California, China, Hong Kong, and Germany, including a new office near Stuttgart, in Böblingen.[36]

In July 2016, the firm opened an office in Darwin, NT, Australia as part of its Asia-Pacific practice group.

The firm announced that effective 1 January 2017, Fred Nance would become Global Managing Partner of Squire Patton Boggs, U.S. LLP, managing 955 attorneys in 36 offices in 16 countries, including U.S., Asia, the Middle East, and Eastern Europe. This incorporates 688 lawyers in the US and the Dominican Republic. Nance has also been named to the firm’s six-member executive committee, where he will be the first African-American partner. Nance has had a storied career with Squires, negotiating a pact between the NFL and the city of Cleveland to return the Browns to the city; becoming a finalist for the position of NFL Commissioner in 2005; saving 1,000 and securing 600 more Defense Finance and Accounting Services (DFAS) jobs for the city, when the Pentagon said it could no longer afford them; and signing up a young high school basketball player, LeBron James, as a client in 2002.[37]

In February 2018, the firm opened a new office in Atlanta, Georgia.

The company has lobbied on behalf of the Saudis and continues to do so even after it became known that their client Prince Mohammed bin Salman had ordered the 2018 murder of a Saudi-born Washington Post journalist named Jamal Khashoggi for criticizing the notoriously repressive and brutal absolute monarchy.[6]

To mark the second anniversary of Khashoggi's abduction and murder, and protest the years-long extrajudicial imprisonment and torture of Saudi Arabian feminist activist Loujain al-Hathloul, on 2 October 2020 Amnesty International projected images onto the D.C. office of Squire Patton Boggs — drawing attention to the extensive lobbying Squire Patton Boggs has and continues to engage in on behalf of M.B.S. and other Saudi Aristocrats responsible for those atrocities, as well as countless other crimes against humanity.[39]

As of December 2019, Squire Patton Boggs has 45 offices in 20 countries on five continents.[61] The combined firm advises a diverse mix of local and cross-border clients, from Fortune 100 and FTSE 100 corporations to emerging companies and from individuals to local and national governments.[62][63]