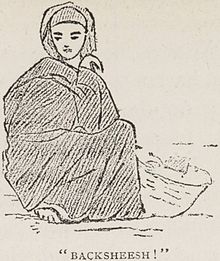 Drawing of a female beggar holding a large bowl, 1879

Mounted policemen in Egypt allow photos of themselves for baksheesh, 2008

Baksheesh or bagsheesh (from Persian: بخشش bakhshesh[1]) is tipping, charitable giving, and certain forms of political corruption and bribery in the Middle East and South Asia.

Baksheesh comes from the Persian word بخشش (bakhshesh), which originated from the Middle Persian language.[2]

The word had also moved to other cultures and countries. In the Albanian, Arabic, Bosnian, Bulgarian, Indian, Macedonian, Romanian, Russian, Serbian, and Turkish languages, bakshish or бакшиш means "tip" in the conventional western sense. In Greek, μπαξίσι baksisi) can mean a gift in general. In German and French, Bakschisch is a small bribe (in Romanian as well, depending on the context; usually employed as a euphemism to șpagă, which means outright bribe). In Maltese the word (buqxiex) refers to a very small payment.

When American mythologist Joseph Campbell travelled on his maiden visit to India in 1954, he encountered pervasive begging which he called the "Baksheesh Complex".[4]

Leo Deuel, a writer on archaeology, sardonically described baksheesh as "lavish remuneration and bribes, rudely demanded but ever so graciously accepted by the natives in return for little or no services rendered".[5]

Bram Stoker mentions backsheesh twice in Dracula. The log of the ship Demeter when recording the voyage from Varna to Whitby uses the word backsheesh separately during the description of two inspections by customs officers, once when the ship was entering the Bosphorus and again while on the way through the Dardanelles.[6]